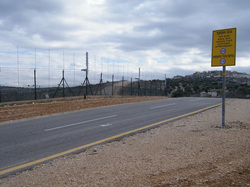 From time immemorial, security fences have been built around the world often in disputed territories to disrupt terrorists, drug smugglers, and illegal immigrants from entering.  No doubt, these fences often cause difficulties for native populations in the vicinities where they’re built.  To name just a few:

India/Pakistan:  India is constructing a fence along the majority of its 1,800 mile border with Pakistan in the disputed territory of Kashmir. The fence is designed to keep terrorists from crossing the border from Pakistan to launch attacks in India.  Made up of barbed wire, concertina wire, and giant 25-foot-tall floodlights, it’s a formidable barrier and accomplishing the task it was created to do.

Kyrgyzstan/Uzbekistan:  A land dispute led to the unilateral construction of a barbed wire fence by Uzbekistan to secure their border with Kyrgyzstan in the fall of 1999. The fence was constructed after Islamic terrorists from Kyrgyzstan were blamed for bomb attacks in the Uzbek capital of Tashkent. The construction of the fence has caused economic hardships in the poor agricultural areas of the Ferghana Valley and has separated many families in this traditionally integrated border region.  Even more interesting is the security fence being constructed by the Saudis between them and Yemen.

Saudi Arabia/Yemen:  Despite incessant criticism of Israel the Saudis have none the less constructed a physical barrier of sandbags and pipelines, re-enforced with concrete.  It stands 10ft. high and spans the entire 1800 kilometer border shared with Yemen.  Ostensibly created to prevent the violence in Yemen from spilling over into the Kingdom, it nonetheless has created hardships for people living in both countries along their common border.

Security Fences Around the World

But they weren’t done yet.  At a cost of $590 million and to further insulate themselves; in 2006 the ever paranoid, oil soaked Saudis began constructing a 559 mile concertina wire fence, 23 feet high along it’s border with Iraq to prevent refugees from entering their territory.

Baghdad/Iraq:  Attempting to end sectarian violence in that war torn capital, a movable 7.1 ton, concrete, sectional, 12 foot high fence was created in 2007.  Many Iraqi’s, not included in the decision to do so are still up in arms over its construction.  The Sunnis have claimed the fence was a deliberate act on the part of the Americans to isolate them.  A claim no doubt with a great deal of merit.

Afghanistan-Pakistan:  Created by Pakistan in September 2005 to stem the flow of Taliban and al-Qaeda into their country.  The fence whose purpose has proven unsuccessful, none the less was slated to span their mutual 1500 mile border.  President Hamid Kazai of Afghanistan strongly objected to its construction claiming it would, “enslave the Afghans,” yet its construction continued.

Iran/Pakistan, Spain/Morocco, and even within Italy, a steel 10 foot wall known as the “Anelli Wall” was constructed to quell gang violence, drug dealing, and prostitution just outside the city of Padua.

Walls of the World

What do all these walls, embankments, and security fences have in common?  To the outside world few if any people, including myself have much knowledge of these or any of the hundreds others built by countries around the globe for purposes of separating groups of people nationally or internationally for one reason or another.  Has the world wide media made much of a squawk?  If they have a news geek like myself would have heard about it, but haven’t.  However, Israel, oh that Israel, when it comes to her, she’s an entirely different story.

On June 1, 2001 a Palestinian named Saeed Hotari was standing in line outside a Tel Aviv discotheque called the Dolphinarium.  Along with several hundred, mainly newly arrived youths from Russia he seemed like just another kid waiting to have a good time on a Friday night.  Unfortunately that wasn’t the case.  According to survivors of the 21 killed, 132 severely injured in an horrific blast, Hotari was seen banging on a drum loaded with explosives and ball bearings just prior to detonation.

As a result of this and other incessant terrorist homicide bombings against Israeli civilians, a grass roots organization called, “Fence for Life” began petitioning the Israeli government to create a continuous fence between the Palestinian population centers and the Jewish population.

The idea of a physical fence separating Jewish and Palestinian Arab populations wasn’t new, it was first broached by the darling of the left, former Prime Minister of Israel, Yitzhak Rabin in 1994.  Following a particularly brutal homicide attack in Tel Aviv, Rabin stated, “We have to decide on separation as a philosophy.”  Keep in mind this prophetic statement was made 6 years prior to the second “intifada.”

In the first years subsequent to Rabin’s assassination, plans for the fence were put on hold but were revisited and put into action by the Sharon government In June 2002 as the body count of innocent Israeli’s began to mount from an increasing number of homicide bombings.

More concerned with the inconveniences caused by this barrier than the mounting death toll of Israelis, the hypocritical world body, the E.U., and just about everyone else; including the Assads of Syria jumped all over the government of Israel for erecting the fence.  A barrier of separation, the sole objective being to prevent the uncontrolled entry of Islamic killers from Judea and Samaria into Israel proper.  One in which by all measure is successful doing so.

In most places, the impediment is comprised of an electronic fence with dirt paths, barbed-wire fences, and trenches on both sides, at an average width of 60 meters.  In some areas, the defense establishment decided to build a concrete wall six to eight meters high in place of the barrier.  The length of the system already built, under construction, or in planning is 709 kilometers, a distance twice as long as the Green Line.

Apartheid! Apartheid! the sanctimonious bleeding hearts around the world cried and are still crying.  From the hallowed hallways of the United Nations you can still hear the echoes of reproach being hurled against Israel for supposed human rights violations.  But nowhere in the din of this outrage is any thought given to the death and maiming of thousands of innocent people murdered in cold blood for no other reason than they were Jewish.  On buses, on trains, in Day Care centers and schools, eating in restaurants, or celebrating weddings, Bar Mitzvahs or the birth of children at a catering hall, the homicide bombers did not, and do not discriminate, they seek to kill as many Jews as possible.  With unfortunate exception, the security obstruction has been an unmitigated success in thwarting these goals.

Victims of Palestinian Violence and Terrorism

As the graph in the above URL indicates, the need and efficacy of the security fence is evident by the decrease of homicides from bombings in 2002; 220 deaths: to only 3 deaths in 2007.  This has direct correlation to the progress made during the fence’s construction.  However telling these statistics are, they don’t begin recognize the real human suffering and anguish victims of terrorism have gone through before the security fence was built.

Analogous to reading about the number 6,000,000 million being killed during the Holocaust, the number is so big, we tend to forget that everyone of those six million had a family and friends that mourned their individual death.  So is true of the victims of Islamic terrorist attacks in Israel.

To put a human face on these latest victims of Jewish hatred, I urge you to look at the following URL and read some of the stories of innocent people murdered for no other reason than being Jewish.

Has the fence stopped all terrorist attacks, absolutely not.  Israel is faced with a dogmatic, cowardly enemy driven by a cultist mandate to kill and maim as many Jewish innocents as possible.  This past year alone:

Attacks such as these are sure to come notwithstanding the security fence.  But most assuredly it has saved hundreds if not thousands of lives and casualties of not only Jews but Palestinian Arabs which may have been killed during IDF pursuits of terrorists throughout Judea and Samaria if it hadn’t been built.

Despite their railing and howling against Israel, the U.N. seems to agree.  In the face of a dastardly enemy, security fences save lives.  Following a deadly attack against their Baghdad offices, the U.N. began building a $21 million dollar barrier fence in and around their New York City headquarters.  I guess when it comes to themselves, they’re not much worried about inconveniencing people or being accused of apartheid.