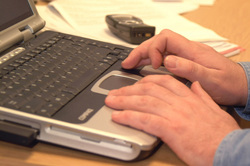 Bloggers who write about Israel are a resource for personal experiences and first hand information.
A Soldier's Mother - experiences of a mother whose son goes into the army

Abu Yehuda -- the struggle to keep the Jewish state

Backspin - the weblog of Honest Reporting

Barry Shaw - the view from Israel

Dry Bones - stories behind the political cartoons of Yaakov Kirschen

Israellycool - inside the mind of an Ozraeli

Israpundit  - news and views on Israel and the Middle East

Jerusalem Diaries - live from Jerusalem, first hand, behind the headlines news and views

Point of No Return - the Middle East's forgotten Jewish refugees

Ray Cook - Israel, Zionism and the media from the UK

Snapshots - blog of CAMERA, Committee for Accuracy in Middle East Reporting in America

This Ongoing War - a blog from the Malki Foundation

The UK Anti-Israel Movement - a blog by Richard Millet